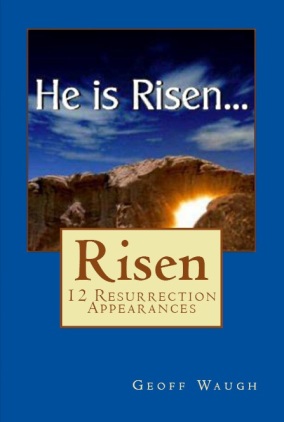 The true story of 12 resurrection appearances

This book gives the full eye-witness accounts of 12 resurrection appearances.

RISEN above is Part 1 of the longer book:

The true story on which the movie RISEN is based

AMAZON – paperback in colour, look inside

Our Month in Israel:  We walked where Jesus walked

Part 2: Our Month in Israel, gives my reflections on walking where Jesus walked, with photos of those locations.

Angel quote on the door of the Garden Tomb in Jerusalem

Most people who were involved at the beginning of that mysterious month thought the unbelievable rumours were impossible, and said so. Loudly.

Only a few, very few at first, thought it may have happened. Even after a month some still doubted that it actually happened.

They saw the awful, brutal execution. Jesus had been severely flogged and tortured early that morning before his execution. The conquering Romans made sure their victims suffered maximum agony and humiliation on thousands of crosses, suffering publicly and slowly in excruciating pain to their last agonized breath. That’s how we got our English words excruciate (ex-crux – out of the cross) and agony from the Greek word agon (struggle or contest).

Romans crucified their victims along the main road just outside a town or village. They lopped trees and their victims carried the crossbar to the dreadful execution site where they were nailed to the crossbar and hoisted onto a tree trunk or stake. Peter later wrote that Jesus bore our sins in His own body on the tree (1 Peter 2:24). The execution place just outside Jerusalem’s city wall was called the place of the skull, with graves nearby. There are many graves just outside that city wall even today.

Eye-witnesses saw and heard the horrendous spectacle, a few like John from nearby. Spectators taunted the central victim: And the people stood by, watching; but the leaders scoffed at him, saying, ‘He saved others; let him save himself if he is the Messiah of God, his chosen one!’ The soldiers also mocked him, coming up and offering him sour wine, and saying, ‘If you are the King of the Jews, save yourself!’ (Luke 23:35-37)

The three struggling victims gasped out brief cries, one with angry accusations: One of the criminals who were hanged there kept deriding him and saying, ‘Are you not the Messiah? Save yourself and us!’ (Luke 23:39).

Soldiers divided the victims’ clothes among themselves, gambling for some. Eventually they smashed the legs of the two victims still alive so they died quickly, no longer able to push up from their spiked feet to gasp more breath. Religious leaders wanted them off the crosses before the Sabbath began at sunset.

But when they came to Jesus and saw that he was already dead, they did not break his legs.  Instead, one of the soldiers pierced his side with a spear, and at once blood and water came out. (He who saw this has testified so that you also may believe. His testimony is true, and he knows that he tells the truth.)

And when all the crowds who had gathered there for this spectacle saw what had taken place, they returned home, beating their breasts. But all his acquaintances, including the women who had followed him from Galilee, stood at a distance, watching these things (John 19:33-35; Luke 23:48-49).

The mystery deepened rapidly. Matthew, the disciple who had been a despised tax collector for Rome, reported that the curtain of the temple was torn in two from top to bottom. The earth shook, the rocks split and the tombs broke open. The bodies of many holy people who had died were raised to life. They came out of the tombs after Jesus’ resurrection and went into the holy city and appeared to many people (Matthew 27:51-52).

Available on Amazon & Kindle – Look inside

I’m happy to mail you a free paperback copy in thanks for your 5 star review comment on Amazon & Kindle.  Just give me your address in a comment at the bottom of this page here on Renewal Journal.  Blessings.