Summaries of Revivals Pentecost to the Reformation 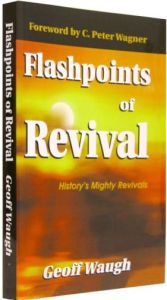 Summaries of Revivals
from these two books by Geoff Waugh:
Flashpoints of Revival
Revival Fires

Pentecost to the Reformation

Significant impacts of the Spirit of God have continued through history. These Spirit movements were often ignored, minimized or denigrated for many reasons:

1. Some historians wrote for predominantly secular purposes, so ignored significant Spirit movements. Josephus referred only briefly to Jesus and his troublesome sect.
2. Many historians wrote from the perspective of the established church, which often opposed and suppressed revival movements.
3. Strong impacts of the Spirit constantly initiated new movements which criticised and threatened the established order, so these movements were opposed, their writings destroyed and many leaders martyred.
4. Authentic revival movements were often regarded as heretical, and their leaders killed, as happened with Jesus, the leaders in the early church, and throughout history.
5. Some Spirit movements became cults with heretical teachings, and so brought disrepute on the whole movement and suspicion concerning charismata, especially prophecies, so they were opposed and suppressed.
6. Personal and historical accounts of impacts of the Spirit have been systematically destroyed during subsequent historical periods, often burned as heretical.
7. Excessive enthusiasm or fanaticism in revival movements have brought these genuine Spirit movements into disrepute and so generated more opposition.
8. Leaders and adherents of revivals have often been occupied with other pressing priorities such as ensuring their own survival rather than recording their history.

However, records have survived, mostly after the invention of the printing press. Revivals demonstrate biblical patterns of authentic Spirit movements. Evangelical revivals provide evidence of these charismatic encounters that became the empowering force in revival.

Charismatic impacts in Spirit movements are normal in many revivals among masses of people. Throughout history many people led reform and revival movements that powerfully affected the church and the community.

Before Constantine the church spread rapidly in spite of, and even because of, persecution. The witness of the martyrs influenced many people. After Constantine the Holy Spirit continued his work in the church and the world, often causing strong opposition as in the New Testament. He did not take a break during the Middle Ages!

Irenaeus (d 195), a student of the Apostle John’s disciple Polycarp, led a considerable spiritual awakening in Lyons in southern Gaul where in addition to his Episcopal responsibilities he learned the local language and his preaching was accompanied by gifts of the Spirit, exorcisms and reports of some raised from the dead.

The Montanists, or the New Prophecy movement, flourished in Asia Minor from the second half of the second century into the fifth century. This movement included a revival of prophecies and of acknowledged prophets including women, a challenge for Christians to forsake worldly attitudes with stricter living standards in Christian communities, and a strong belief in the second coming of Christ with the ideal society soon to be established in the New Jerusalem. Montanus spoke in tongues and began prophesying at his baptism, and taught that the gifts of the Holy Spirit were still available. The lawyer-theologian Tertullian (c 150-223) became the most famous convert to Montanism when he joined that movement early in the third century. The movement came into disrepute because of excesses, particularly in prophecy, but it became a strong challenge to the lax state of the church at that time.

Gregory the Wonderworker (c 213-270), converted through contact with Origen (c 185-254), became bishop of his native Pontus and appears to have led a strong movement of conversion till most of his diocese was Christian.

The church fathers founded monastic orders devoted to serving of God and people, often in protest to laxity and nominal Christianity in the church. Many of these leaders led strong spiritual movements including various miracles, healings and exorcisms, although caution is needed in distinguishing between fact and subsequent fiction.

Augustine of Hippo in North Africa (354-430), strongly influenced the church and society through his writings. His earlier writings indicated a cessation of the charismata in his time, a position which strongly influenced western theology, even though his later writing acknowledged that miracles occurred in relation to the sacraments, prayer of the relics of the saints, and his work The City of God included a chapter entitled “Concerning Miracles Which Were Wrought in Order that the World Might Believe in Christ and Which Cease Not to Be Wrought Now That the World Does Believe.”

Patrick (389-c 461) told of the conversions of thousands of the Irish, initiating active Celtic missionary activity including subsequent evangelism by Columba (521-597) in Scotland and Columban and others in France, Switzerland and northern Italy. By 600 Augustine of Canterbury and his missionaries saw thousands accept Christianity in England and it was reported that they imitated the powers of the apostles in the signs which they displayed.

In the twelfth century Peter Waldo and the Waldensians began reform and revival movements which challenged the church and impacted society. Francis of Assisi in the thirteenth century called people to forsake all and follow Jesus. Many did. They influenced others in society. John Wycliffe and his itinerant preachers, the Lollards, made a powerful impact on England in the fourteenth century. They aroused strong opposition leading to many becoming martyrs.

In the fifteenth century John Hus in Bohemia and Savonarola in Italy led strong reform movements which brought revival but led to their martyrdoms. Hus was known for his unblemished purity of life and uncompromising stand for truth in a decadent society. Savonarola fasted, prayed and preached with prophetic fire which confronted evils of his time, filled the churches, and brought honesty into much of civic and business life.

Gutenburg’s printing press invented in 1456 made the Scriptures widely available. This helped spark the sixteenth century Reformation with leaders such as Huldrych Zwingli in Switzerland initially calling for freedom of conscience though later denying this for others, Martin Luther in Germany proclaiming justification by faith alone based on the supreme authority of scripture, and John Calvin in Geneva emphasizing the awesome sovereignty and grace of God. Radical reformers, such as Felix Manz the first Anabaptist martyr, were killed by some of the reformers in those days of heated religious conflict. John Knox fearlessly called Scotland to repentance amid the intense political and religious fervour of the times.

Since then many revivals won thousands of people to faith in Jesus Christ and made a powerful impact on society. It still happens.

Revival historian Edwin Orr described the major evangelical awakenings as:
the First Great Awakening of 1727-1745,
the Second Awakening of 1790-1830 (The Eager Feet, fired with missionary commitment),
the Third Awakening of 1858-60 (The Fervent Prayer, spread through countless prayer groups) and
the Worldwide Awakening from 1900 (The Flaming Tongue, spreading the word around the globe).

Since then we have also seen similar Great Awakenings worldwide including
the Healing Evangelism Revivals from 1948, including charismatic renewal and revival, and
the Blessing Revivals from the 1990s, into
the Transforming Revivals of the 21st century.

Comments on: "Summaries of Revivals Pentecost to the Reformation" (1)